Home » Dog Agility Through Life: Kid as an Agility Athlete

Dog Agility Through Life: Kid as an Agility Athlete

Originally published in Finnish the 20th of December 2016 on agilityurheilijat.fi.
Written by: Ulla Tuomi

Physiotherapist Jarmo Ahonen was talking in the YLE morning TV how he was worried of the lack of children’s physical activity. Could dog agility encourage children to move? Recently, we got to know about this great children’s agility activity in Mynämäki, hosted by Hilma Larkela, and we can answer: yes you really could! Watch the video yourself! In this article we show you why agility is such a great form of activity for kids. In our next text, you get hands-on tips how you can arrange your own agility event for kids.

What makes agility such an excellent exercise for kids, is its ability to merge the benefits from both the exercising and working with a dog, in such a unique way.

Benefits of Agility for a Child

In many ways, exercise affects the biological, mental and social development as well as health of children and the young. Exercise improves one’s current health and well-being. It also strengthens the conditions to adopt lifelong habits to exercise and live healthy. Exercise also reduces the risk of further illnesses. (Vuori et al., 2011).

“Exercising must bring the child the positive experiences like happiness, success, excitement and the feelings of togetherness.”

When a child or an adolescent chooses their own hobby, they choose it mostly because how well it matches their development and qualification. Exercising must bring the child the positive experiences like happiness, success, excitement and the feelings of togetherness. In this case, exercise and movement training develops the child’s self-image and self-esteem. All in all, exercise should reflect the child or the adolescent’s own desires, needs and possibilities. (Vuori et al., 2011) In order for these feelings to be formed for the child or the adolescent, the activities of a trainer, a training buddy or a competition companion, are also important. So, let’s remember to take the needs of the children into account and encourage adolescents to enjoy the joy of exercise!

Agility as the tool to make the child to move

Exercise as a child develops motor and mobility skills. This development of skills is mainly based on neural learning. For this reason, the best time to learn motor skills is the development time of the nervous system, ie the first ten years. Motor learning is the most effective when a child has plenty of opportunities for activities that require the simultaneous activity of multiple senses, such as mobility, handling and balance skills. (Vuori, et al., 2011.)

In agility, changing your own behaviour according to the dog’s movement is what adds to that. The dog doesn’t always work as expected, so in agility the child would have to make some quick changes according to the dog’s actions. The child also must consider their own position on the field ever since familiarizing the course.

At the age of 5-8 years, the child easily learns comprehensive and basic movements like running. At this age, training should be versatile, and it should include balance, agility, mobility, and speed training, as later on the development of these features are more challenging. The age of 9-12 is the most important period for human motoric learning, because the child’s development physically is fast, and the children try out new motoric performances. The focus of the training should then be a combination of coordinative moves and mobility workouts. (Kauranen, 2011.)
The most favourable for bone development is the time between the age of ten and puberty. The best suited exercise types for that age are the kinds that require speed and strength, involving sudden changes in direction, and impacts and shocks. (Vuori, et al., 2011.) Agility and the supporting training of it offers those all at their best.

The development of motion that are characteristic for the children’s sports, is the prerequisite for managing the type of sports. (Vuori, et al., 2011) For this reason, it can be beneficial for the child to also train cues without a dog, so the techniques get imprinted in the muscle memory and they can remember them more easily once working with the dog. This training of skills can be developed by the physics training of an agility coach. Children should move at least 3 hours each day. So, a dog agility group alone, where the child typically exercises roughly 10 min only, is not enough. You get more minutes from warm-up and cool-down jogs, as well as other activities.

In our next part we will introduce you to the kids’ Funna® group in Mynämäki. In Funna®, children work with dogs, which are experienced in agility. This could be beneficial for the child, because an experienced dog could read even the weakest handling movements of the child. And on the other hand, one can do versatile exercises and proper track training with the dog, which could be crucial for the child’s self-efficacy. Many localities don’t have agility for children, so the child is training in an adult group and may sometimes experience being left outside, so we think it is great that clubs also try to organize agility for the groups of children.

The Benefits for a Child when Working with a Dog

Working with a dog is a natural part of agility. For the children in general, this is naturally interesting and fun. Studies have shown that when a child works with animals, their empathy increases, which also reflects to the interactions with people. With animals, the child also learns responsibility. It also reduces restlessness and loneliness. (Fawcett & Gullone, 2001 & O’Haire, 2010).

In agility, the child is constantly interacting with the dog, while the dog follows the instructions of the child. This is important for the child because the child gets aware of the importance of their handling. The dog also reacts to the child’s positive signals, which makes the child experience success. 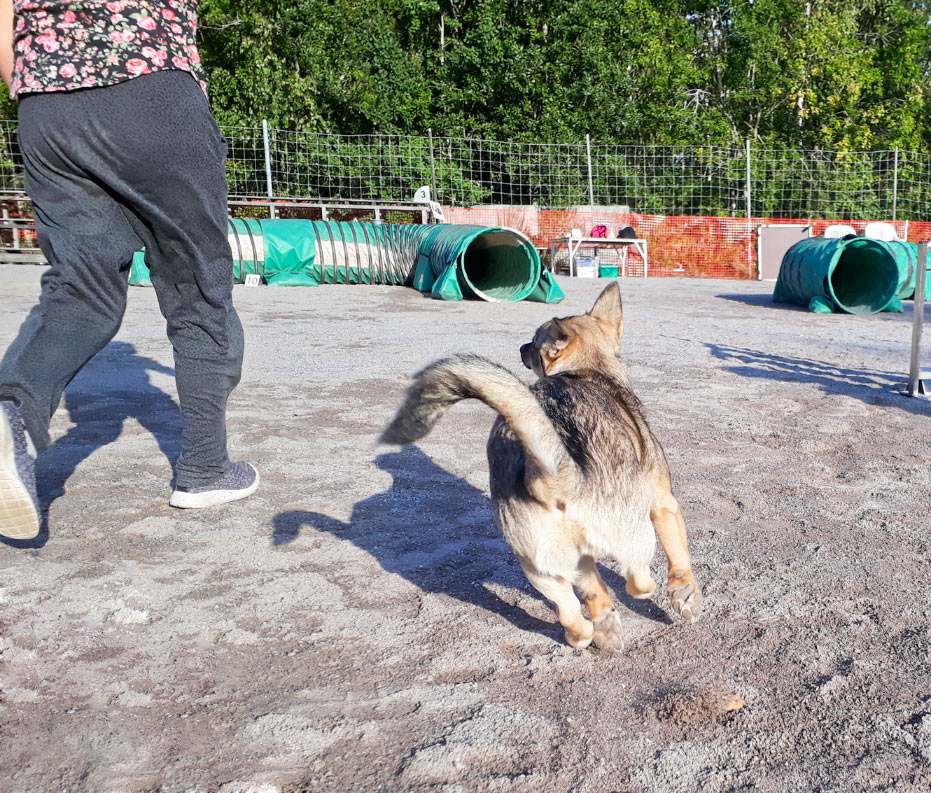 The dog’s sociability and attention seeking are beneficial for the relationship between the child and the dog. Working with the dog increases the amount of oxytocin, which makes the child, like the adult, feel good. Being with the dog also lowers blood pressure. The dog also gains the same benefits physiologically, while working with a human (Odendaal, 2000). So, it’s a clear win-win situation.

So next time, try to leave the tablet home (or, well, to be on the safe side, in a car for example) and take your kid with you to train!

Fawcett, N.R., Gullone, E., 2001. Cute and Cuddly and a Whole Lot More? A Call for Empirical Investigation into the Therapeutic Benefits of Human–Animal Interaction for Children. Behaviour Change 18 (2), 124-133.